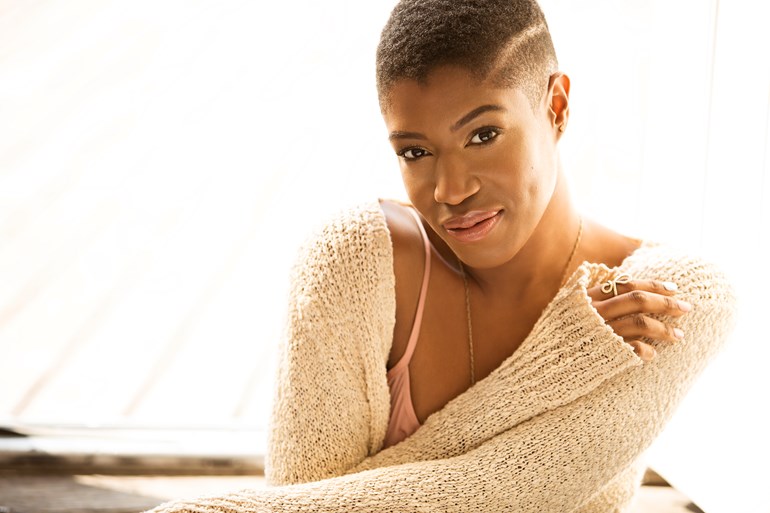 Resident Dramaturg Gina Pisasale hosts NYC-based actor Tsebiyah Mishael Derry as her guest for Scoop, a casual conversation before every Wednesday evening performance. In Nina Simone: Four Women, Tsebiyah takes on the role of Sweet Thing - one of the women Nina encounters in the bombed out ruins of the 16th Street Baptist Church.

“My skin is tan
My hair is fine
My hips invite you
my mouth like wine
Whose little girl am I?
Anyone who has money to buy
What do they call me
My name is SWEET THING…”

Gina sat down with her to learn about her journey towards a career on the stage and experience rehearsing for Nina Simone.

G: How did you get into performing - both as a singer and as an actor?

T: The after-school musical theatre program at my elementary school totally brought me here. I grew up in a household full of music — my father being a singer and vocal coach — so the desire to get onstage and perform was always there. But years of drama club musicals really taught me how to get up the courage required to own the stage. It also taught me that it’s more than a hobby for me. It had to be my career.

G: How familiar were you with Nina Simone's life and music coming into this project? What has been awesome to discover about her?

T: I actually didn’t know much about Nina Simone until sometime last year, when I watched “What Happened Miss Simone?”, a fantastic documentary about her on Netflix But the process of working on a play is intimate, and I have never had the pleasure of studying her so closely. What has struck me about her thus far is the immense pressure she was under, to succeed in her career and provide for her family, but also to be poised and presentable for her audience, while carrying anger about the horrors that were happening to the American Black community around her. Her compulsion to change the direction of her art and address what was in her heart, and in the news, is not only admirable, but a very relatable struggle. A beautiful lesson on using our rage and hurt in this crazy world in a productive way, instead of a destructive way.

G: At this point in the rehearsal process, is there a moment that has been particularly memorable?

T: This rehearsal process has been so dreamlike — so much has just perfectly fallen into place as everybody has brought their individual work and presence to the room. While I can’t quite pick a particular moment, I can say that the power and the energy coming from everyone is overwhelming. There was a magic and spirit in our rehearsal room from day one, like Nina herself was there with us!

Gina and Tsebiyah invite you to Scoop every Wednesday evening to find out more about the process of creating this production. Hear stories from behind the scenes, learn why Christina Ham decided to write this play, and much more – while sharing snacks and conversation with an intimate group of fellow theatre-lovers.

Scoop starts at 6pm in the Leonard C. Haas lobby on the dates below. Add it to your ticket for $5 when purchasing Nina Simone: Four Women tickets online, buy separately (you can even come to discuss the show after you've seen it, without having to stay for another performance) or call the Box Office at 610.644.3500.