Peter Pan at 70: The Inspiration Behind 'For Peter Pan'

Has anyone ever written you a play for your birthday?

Kathleen Kehoe Ruhl, playwright Sarah Ruhl’s mother, has an ambivalent relationship with the word “grown-up.” An English teacher who earned her PhD in Language, Literacy, and Rhetoric in her 60s, Kathleen also has an extensive professional acting resume, which includes playing Peter Pan when she was a teenager at the Davenport Children’s Theater. Sarah grew up seeing pictures of her mother wearing green tights and flying, including a newspaper photograph of Kathleen next to iconic Pan performer Mary Martin, both with arms outstretched, taken when the national tour of J.M. Barrie’s Peter Pan came through Iowa. Stories of young Kathleen Kehoe as Pan were legendary among the five Kehoe siblings. And so, in Sarah’s young mind, Peter Pan was conflated with her mother, who embodied the magic of theatre. 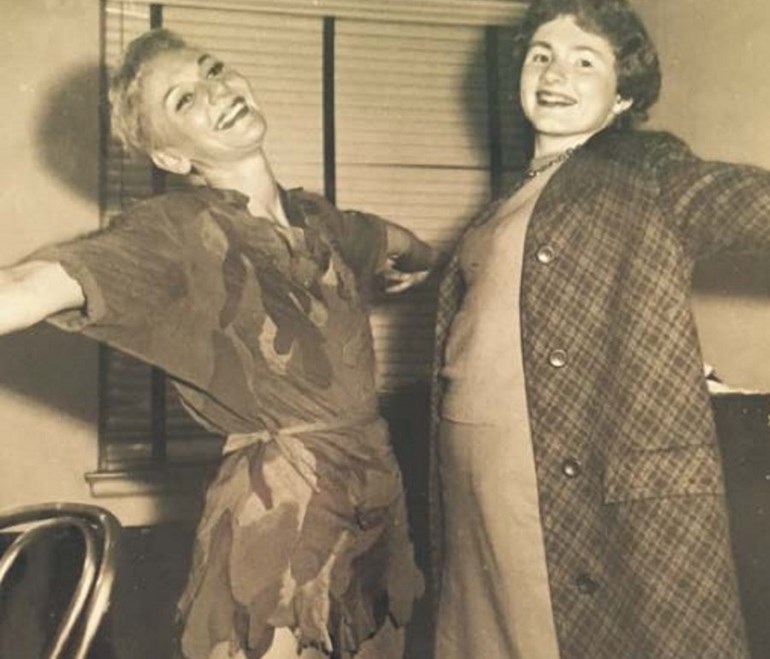 Sarah wrote For Peter Pan on Her 70th Birthday as a gift to her mother for her 70th birthday. As a poet-turned-playwright known for her epically dramatic gestures (people turning into almonds from melancholy, stones talking) she has “always been interested in the idea that you can write something with mythological feeling, but with real antecedents.” Thinking about her own antecedents, she describes: “I have a large extended Irish-Catholic family from Iowa that has always been, to me, the cradle of civilization. My own Mesopotamia is found along the banks of the Mississippi River in the Quad Cities, where I spent every holiday, catching fireflies with cousins, reading books all day while dipping my hand into a jar of homemade party mix, rolling down hills, lighting sparklers, and eating ham…[and] listening to people who love each other argue about politics…a family sport… I love and adore my family.”

So rather than write what she considers a traditional Western family drama that trades upon angst and “a horrible secret,” Sarah wondered, “How do stories come through families with love, and how do families come through stories with love?” She began by asking the five Kehoe siblings: Do you pray? What are your earliest memories of Christmas? What do you associate with your birth order? What do you think the afterlife is? What do you think is wrong with this country?

When she had a first draft of the play, she anxiously went to them for their reactions in birth order – so, her mother first – and incorporated their notes. During the play’s development, if there was a joke that wasn’t working, the director would ask Sarah, “Can you email your uncle and ask for a different doctor joke?” She’d ask, “Uncle Bill, do you have a different doctor joke?” And it would go straight in.

In what Sarah calls “strange synchronicity,” J.M. Barrie had created Peter Pan for 5 siblings that he would eventually adopt after their parents’ deaths in 1910. In his dedication, Barrie wrote: “What I want to do first is to give Peter to the Five without whom he never would have existed. I hope, my dear sirs, that in memory of what we have been to each other you will accept this dedication with your friend’s love… I suppose I always knew that I made Peter by rubbing the five of you violently together… My grandest triumph… in the play of Peter Pan (though it is not in it), is that long after No. 4 had ceased to believe [in fairies], I brought him back in the faith for at least two minutes.”

May the love that comes through your family stories – your Neverlands – lift you into flight and bring you back in faith to a place where you’ll never have to grow up.