Soon I Will Be Done

"'The old Negro Spirituals give an account of the life and history of Black Americans and how they suffered enslavement and persecution solely because of their skin color. The lyrics almost always served as testimonies of a people who had a strong faith that their God would someday deliver them.' – Soul Praise, Honor Books

Although the slavery that our ancestors experienced became illegal, Black people in America have yet to experience the true liberation and freedom to exist as our white brothers and sisters. We are still fighting to 'BE'. We are still hurting from the residue of oppression that is infused in the fabric of our society. We are still dying at the hands of the law. We are still marching and protesting for basic human rights. We are tired but we are strong. We are resilient. We lean on the spirit of our ancestors to direct and guide us. We are able to connect with them through these Negro Spirituals while developing new spirituals in the voice of our generation.

From W.E.B. Du Bois' The Souls of Black Folk: 'They tell of death and suffering, and unvoiced longing toward a truer world, of misty wanderings in hidden ways.'"

Virtual tickets are available now for Zonya's Spiritual Uprising, streaming this spring as part of our digital season! Click here to learn more.

Zonya also recently wrote and directed a video for "Get Through This", performed by her band House OV Mahogany, as a loving message of hope and solidarity to all those who are struggling right now. Watch the video on YouTube. 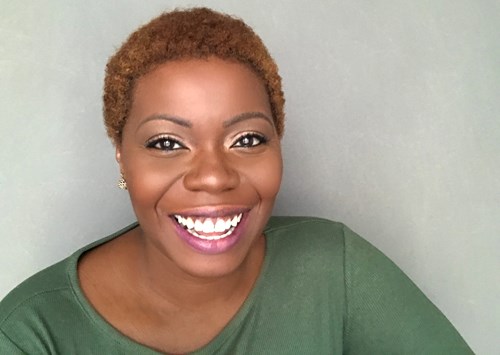 A Carolina country girl, I grew up singing in a hand clapping, foot stomping church. I stumbled into the theatre world toward the end of my high school career on a whim, decided to major in theater while attending North Carolina A&T State University in Greensboro, North Carolina. Upon receiving my B.F.A., I was afforded the opportunity to perform at various theaters while teaching creative dramatics for North Carolina Parks and Recreation.

Still on the fence about moving to New York City, I decided to pursue a graduate degree. I attended and received an M.F.A from the University of Nevada, Las Vegas. Six month after receiving my graduate degree I miraculously landed the role of Celie in The Color Purple on Broadway (produced by Oprah Winfrey), replacing Fantasia Barrino. Following the closing of the Original Broadway Production of The Color Purple I traveled the continent in the First National Tour of the Tony Award-winning musical Avenue Q. I also gave my passport a good workout performing on stages in Lyon, Liverpool, Scotland, St. Martin, and Toronto.

Some of my favorite highlights include singing at the famed Carnegie Hall and becoming a member of the famous, soul-stirring, Grammy-nominated and Tony Award recipients, Broadway Inspirational Voices (BIV). Joining BIV has led to other highlights – recording with the band The Yeah Yeah Yeahs, performing in Mariah Carey's 2014 Christmas Spectacular, and providing background vocals for TV shows America's Got Talent, Smash, and The David Letterman Show.

Volunteering for several organizations including The Ronald McDonald House, Broadway Cares/Equity Fights AIDS, and Covenant House, continue to be some of my favorite experiences. I am one of the founding members of the newly created event band House OV Mahogany and a proud member of BOLD, an organization established in 2015 that supports and uplifts black womyn in the entertainment industry.

The Negro Spirituals were a part of my childhood and I hope to introduce or remind them and their importance to coming generations.