The Nail That Sticks Out: HOLD THESE TRUTHS Panel
May 11, 2022 By: Mieke D, Director of Community Programs 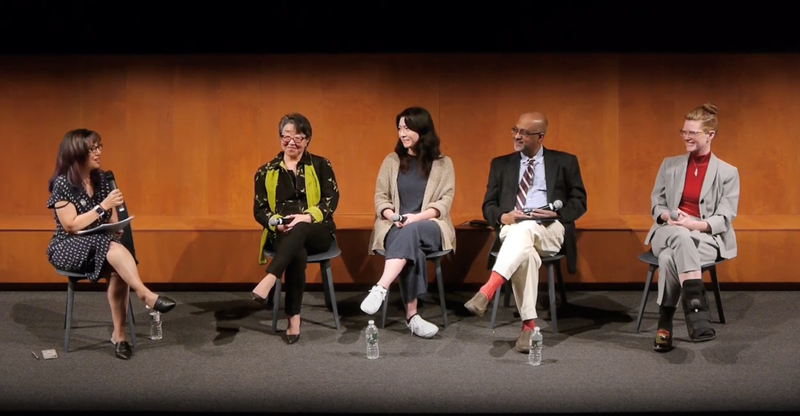 It’s only my second month as the new Director of Community Programs at People’s Light, and I am already wildly inspired by all of the intersecting conversations I have gotten to have across histories, communities, disciplines, cultural practices and regions within this diverse county — with theatre, as always, at the core!

On May 1, I had the privilege of bringing together five incredible people for Present Day Connections: Ending Detention, a discussion among community-based organizations deeply connected to the legacy of Japanese Incarceration while working to end detention now. The panelists traced the intersections between their work, communities and histories in relation to Hold These Truths and Gordon Hirabayashi’s incredible story.

I want to share this panel with you for so many reasons, but especially because of the cross-community collaborations and profound coalition-building that each of these panelists and their organizations bring forth within their work fighting for civil rights and social justice. There are a lot of guiding lights in here about how to make sense of the history of Japanese Incarceration in the present moment, while wading hopefully and tenaciously towards a liberatory future where all of us are truly free.

A discussion of allyship starts at 26:37. To find out what you can do to get involved, take action, and support these local organizations, go to 46:53.

(They/them) Jules is a gender-expansive community advocate, artist and aspiring healer who is a member of the Shut Down Berks coalition. The coalition is made up of organizations and individuals fighting to close the Berks County immigrant prison that is operated by ICE near Reading, Pennsylvania. Jules is deeply invested in being a part of shutting down ICE'S immigrant detention facility currently detaining women in Berks County as well as being a part of the fight to end immigrant detention, nationwide.

(He/him) Advisor to CAIR-PA Board of Directors, Member and Fundraising Co-Chair, CAIR-Philadelphia Executive Committee. In addition, Iftekhar has served as: member of the Board of Directors (ACLU-PA), Middle East Peace Building Unit advisory committee (AFSC), and organizer (local Montessori Schools). Engaged in local interfaith educational initiatives, he focuses on ‘Islam and the Middle East’ and ‘US Foreign Policy and the Muslim World’. He developed the 10-part course, ‘Understanding Islam and Muslims through History and Jurisprudence’ for CAIR-Pennsylvania 15 years ago and has since been teaching it in 40+ venues. Born in Bangladesh, he's lived internationally, consulting in Financial, Healthcare and  Pharmaceutical industries (Texas A&M University: B.A. and M.A.; Penn State University: PhD.). Iftekhar is 25+ years married to Bushra Kourani and has three children.

(She/her) Major events in her life were a) Peace Corps Volunteer in Saipan, Mariannas in Micronesia b) teaching during two sabbaticals from GFS in Tokyo and Kenya c) educating about the Japanese American incarceration during World War II. She served in various capacities with the Philadelphia and National JACL as chapter president, recording secretary, Eastern District Governor, and National Education Chair. She was active during the Redress movement of the 1980s and retired from  third-fourth vertical classes for 36 years at Germantown Friends School.

(She/they) Linda is a yonsei descendant of survivors of the Manzanar, Jerome, and Rohwer U.S. concentration camps for Japanese Americans. Linda is an organizer for Tsuru For Solidarity, organizing direct actions at Fort Sill, Fort Bliss, and the South Texas Family Residential Center in Dilley, TX. Outside of their organizing work, Linda is a staff attorney for the ACLU Women's Rights Project, developing advocacy and litigation to advance gender justice in all aspects of society. Grounded in familial history of trauma and incarceration, Linda is deeply committed to building collective liberation movements and healing directly impacted communities.

(They/them) Mieke is a mixed-race genderqueer femme of Asian and European descent who makes documentary and collaboratively-devised theater, teaches anti-oppressive curricula, and facilitates spaces for healing and community building with Philadelphia Asian Performing Artists and beyond. As Director of Community Programs at People’s Light, their goal is to build reciprocal relationships with communities directly affected by the subject matter of our plays, histories, and social issues, in order to build dialogues for a just world through theater and cultural programming.