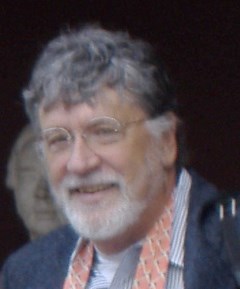 People’s Light: Served as actor, teacher, dramaturg. Over the years at People’s Light he made acting versions of these scripts: Summerfolk, from Gorky, with Margaret Wettlin; A Doll House, from Ibsen; Oedipus, acting version from Sophocles, with Abigail Adams; Alice; scenes and variations from Lewis Carroll; Celebration, a cycle of mystery plays; The Madwoman of Chaillot, from Giraudoux. He played a bunch of parts, from T. Lawrence Shannon, Malvolio, Benedick and Nat Miller to Judge Robedeaux and Canon Chasuble. He wrote program notes and did dramaturgy for shows too numerous to mention.

Theatre Includes: In 1970 he founded The Theatre at Swarthmore, which became the Department of Theater Studies. He retired from teaching in 2002. Out in the great world, he wrote articles, chapters in books, plays, and librettos; he worked as a technical director, master electrician, production stage manager, and dramaturg; he acted and directed in the academy, and for movies and TV. With Rob Austin of the Harvard Business School he wrote Artful Making; What Managers Need to Know about How Artists Work, published in 2003. In 2005 it won LMDA’s Elliott Hayes Award for dramaturgy. It’s about using theatre techniques to do creative work in business: replacing restraint with release, compromise with collaboration, and industrial teams with knowledge work ensembles.