Dominique Morisseau was among the first wave of New Play Frontiers playwrights to immerse themselves in our local neighborhoods when we launched the residency and commission program back in 2013. She certainly wasn’t idle in the intervening years – in addition to writing the script for Mud Row, she premiered four other new plays (Blood at the Root (2014), Paradise Blue (2015), Skeleton Crew (2016), Pipeline (2017)), won a coveted MacArthur Fellowship and numerous other accolades, co-produced three seasons of Showtime’s Shameless, and wrote the Tony-nominated book for Broadway’s Ain’t Too Proud – The Life and Times of the Temptations.

“I remember an area by a railroad … sort of a swampy area, and I was told in passing, ‘Oh yeah, they call that Mud Row.’ That was my entry point. I’ve made a fictional story that’s a fusion of my own family history and oral histories of what I heard from the people that live in West Chester. I imagined those grandchildren, these young people today, [who inherit] these homes. I thought about how African American communities are set up, how things are passed down, sustained, or deconstructed, or gentrified externally and internally. For me, now, this play has also become about family and what ties bind us, regardless.” — Dominique Morisseau

In the resulting play, two generations of sisters navigate class, race, love, and family in the house they inherited from their foremothers, shifting between past and present to paint a living portrait of family legacy. “So well done!! Happy to support a play set in our backyard!”

“The most amazing thing I’ve ever seen. I’ve lived in West Chester my whole life, and I didn’t know about any of this. I am so glad you are telling this story.”

“This show touched every part of my soul. It rang so close to home and what my family has been through living in West Chester for over 100 years.”

Six years in the making, Mud Row would not have been possible without the support of many, including a major grant from the Andrew W. Mellon Foundation to support the development and production of the script as well as the prestigious Edgerton Foundation New Play Award which funded the extra rehearsal time critical to the success of a new play as it reaches its premiere.

But perhaps the most impactful support came from our neighbors down the road in West Chester itself. Local people, businesses, and community partners who lent their advice, space, time, experience, personal history, and more, to the shared vision of lifting up this untold story. A production sponsorship from West Chester LLC. Our ever-expanding relationship with the Charles A. Melton Arts & Education Center. Local historians, advocates, and storytellers whose experience and expertise cannot be overstated. “It is always encouraging to be in the presence of the people who call the Melton Center home. Their hearts move with the passion of people who are excited about building up the next generation. Our conversations served as much background food for Mud Row.” — Dominique Morisseau

Establishing deep community partnerships is a central tenet of NPF, and our work with the Charles A. Melton Arts & Education Center is a prime example. The century-old organization not only acted as our guide and gateway to the local history that inspired the play, but contributed to the effort in other ways: they hosted readings, offered up expert panelists for Townhall-style discussions, and in turn expanded our connections to other organizations and individuals, such as the West Chester chapter of the NAACP, St. Paul’s Baptist Church, and Miss Penny. 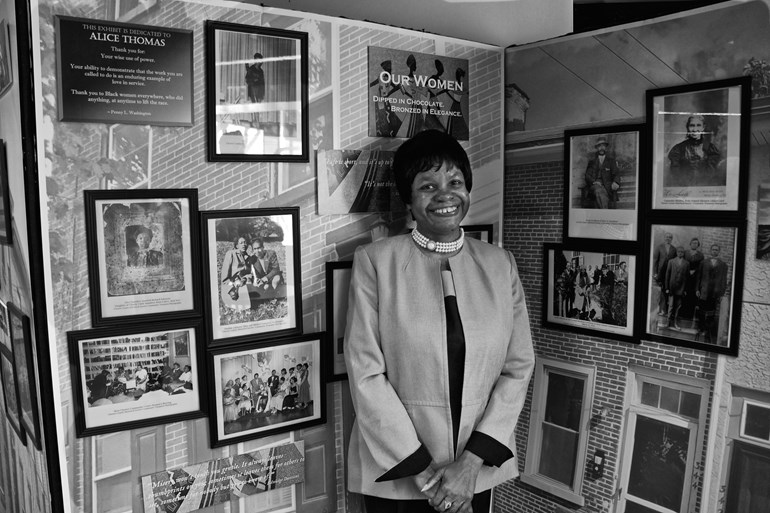 Penny L. Washington in front of the photo display she curated for the lobby. This exhibit has since “returned home” to the Melton Center in West Chester.

We were first introduced to Penny L. Washington — “Miss Penny” — at the Melton Center’s 100th Anniversary Gala. In addition to Miss Penny's valuable insight for the cast and artistic team throughout the rehearsal process, her walking tour of West Chester made a splash. You can read more about it and listen to audio of the tour itself on our blog.

“I learned so many things about our community from Miss Penny Washington that I did not know before, thanks to this walking tour,” said West Chester Mayor Diane Herrin, “Including the fact that B.B. King, Duke Ellington, and Count Basie played at the Star Social Club on Market Street and Frederick Douglass stayed at The Magnolia House on East Miner Street.

“Thanks to her passion for the rich history of the town’s East End, we are now going to approach the Borough’s Historic Commission to seek ways to ensure preservation of the structures that enshrine and celebrate this history before it’s too late.”

80% of West Chester is on the National Historic Registry

While an impressive statistic, this designation comes with no protection against demolition. The commission hopes to change that.

Given a new platform to speak from, Miss Penny led a subsequent presentation to the Historic Preservation Commission, which has opened important dialogue within the community.

In the meantime, in July of 2019 (about halfway through the production of Mud Row), the Melton Center was awarded $2.1 million by the Pennsylvania Housing Finance Authority (PHFA) for much-needed affordable housing along Market, Miner, and Worthington Streets.

You can read more about the vital role this West Chester organization played in Mud Row’s genesis here on our website. Peter Crimmins reports for WHYY here.

While the impact of these important conversations continue to ripple out, we look ahead to the Spring of our 19/20 Season, and another new play with deep connections to West Chester — Bayard Rustin: Inside Ashland.

Mud Row’s local ties have inspired director Steve Broadnax to delve into the life of the Civil Rights leader and West Chester native, who also had ties to the Melton Center in his lifetime. Steve first directed Kamilah Forbes’ The Mountaintop here at People’s Light in 2016, followed by Dominique Morisseau’s Skeleton Crew in 2018.

“I was initially excited to see Mud Row because it is set in West Chester and is being produced by a fantastic local theatre. I was not prepared, though, for how deeply it would move me. The set was stunning, the writing was phenomenal, the acting so raw. I couldn’t move at the close of the final scene, so wrapped in the emotions I felt and processing everything I had experienced. @domorisseau not only captured the themes of class, race, family, and intergenerational conflict. Yes, those layers were all there. But moreso, she so perfectly captured the human experience. On the stage, I didn’t see actors acting. I saw Elsie, Toshi, Regine all struggling with their demons and misconceptions about the family they were born into as well as the futures they were pursuing. I can’t get over the impeccable set, a living room we all recognize from somewhere in our lives. This house became a character in and of itself. I cannot encourage you enough. If you are in the area before the end of July, get tickets to see Mud Row at @peopleslight immediately.” - @stephreallife